Safety Tips: How to Calm an Aggressive Cat

No matter how sweet and loving our cats can be, these furry friends have one attitude that we all don’t want to deal with –their aggressiveness. However, such cases are inevitable, as many factors can affect their emotions. Unfortunately, cats in a fit of rage can be dangerous not only to you but as well as to your family. It is the reason why you, as the owner, should be aware of the things to do at times like this. In this article, we’ll talk about some tips that focus on how to calm an aggressive cat. 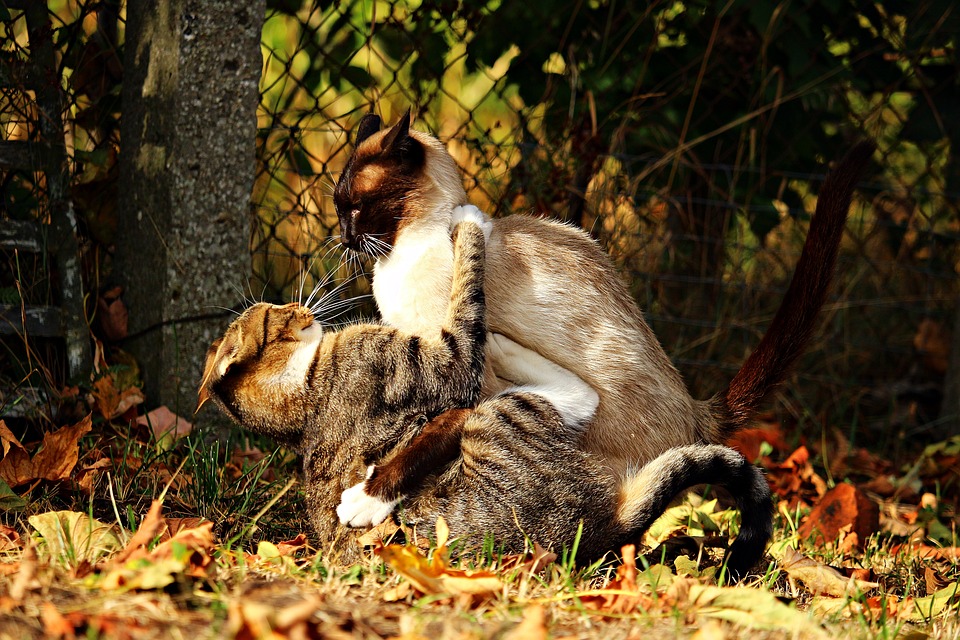 How to stop cat aggression after a vet visit

Cat aggression commonly occurs between cats that are living under one roof but were separated for a brief period, usually when one cat has been taken to a vet or a groomer. Typically, when a cat had a visit to the vet, its scent gets altered, and other cats in the house might find it unwelcome. Either they will snub the cat that has been groomed or treated, or they will attack it right away.

Here are some things you can do to deal with this situation:

Each cat has a unique scent that serves as its personal identification, among other felines. When it comes to communication, cats rely on visual, vocal, and sent cues. So, to avoid cat aggression whenever there’s a trip to the vet, you have to establish a scent communication system. When your cats are sleeping together, groom them one by one and rub against their furs simultaneously, so that they can share a particular scent that would allow them to know they belong in one family.

If possible, establish a routine veterinary visit that would allow you to take your cats altogether. This way, they would have the same scent after being handled by the vet or the clinic staff. This method would decrease the likelihood of feline attacks once you return home.

A sick cat often exudes a different scent that could affect the behavior of other cats in the house. To save the ill pet from being attacked or poorly treated by other felines, put your cat in isolation and give the necessary care it needs. Without the stress caused by fellow cats, an ill cat can recover faster.

How to stop cat aggression towards dogs

Cats and dogs can build a great relationship, especially when they are living together under one roof. However, it is not a secret that tension can also arise between these two. If your dog keeps on attacking the cat, or if it happens vice versa, it can cause problems and stress for the whole family. So, if you’ve noticed that your cat usually becomes aggressive because of your dog, you might consider doing the following tips.

Often, cats attack dogs so that they would be left alone, especially when they want to take a nap. Providing them with a peaceful area where they can rest at peace would reduce the likelihood of pet aggression. Consider setting up a cat tree, or a baby gate for your cat where they can quickly leap.

Both pets can be territorial over toys, litterboxes, and food bowls, among others. To avoid feud between cats and dogs, ensure that each of them has their respective sets of everything. Furthermore, ensure to maintain a safe distance from each other’s belongings.

Even if your cat and dog have a good relationship, it is not enough reason to leave them together. If you are going somewhere, make sure to lock your pets in different rooms where they could both eat and play while you’re away. Leaving them together with no one to attend to their needs might result in a disaster.

Cats are naturally jealous of other animals, and so are dogs. To keep their emotions at bay, make sure that you have enough time to play with them. Spending quality time with your pets makes them feel they are loved, and they would have less time for dull moments, which usually trigger their aggressiveness.

Will neutering calm an aggressive cat?

Neutering is a surgical operation that removes the testicles of male cats. While there is no solid guarantee that this method can make your cat calm all the time, animal experts claim that neutering can help a lot in terms of reducing aggression.

Notably, cat aggression is described as sexual or territorial. This attitude is mainly triggered by testosterone, the hormones produced in testes. Once the testes had been removed, there would be a significant drop in the production of this hormone, and cat owners would find it easier to modify the behavior of their male cats. However, experts warn that it might be challenging to calm a cat that’s been aggressive for a long time.

Experts further explained that inter-cat aggression is mostly witnessed between intact males, primarily because they often protect a much larger territory, and they also roam over greater distances compared to female cats.

The urge to wander around notably becomes stronger during mating season, which often becomes the reason why they are being exposed to other factors that catalyze aggression. Neutered male cats also have lower sexual interest compared to intact cats. However, there is still a little possibility that they will always get attracted to female cats.

Neutering, according to experts, can also lessen the pungent and strong odor of a cat’s urine. Many owners shared that after the operation, their cats became less odorous and less interested in fighting.

Will spaying calm an aggressive cat?

Spaying, on the other hand, is a surgical procedure that involves the removal of a female cat’s reproductive organ. Aside from the primary purpose of decreasing the risks of hormone-related diseases and prevention of unplanned litters, spaying is also a method that helps stop or reduce unwanted cat behaviors.

Intact females, when in heat, become anxious, loud, and restless. They tend to attract all the unneutered male cats within your vicinity. Out of competition, these males can become aggressive or frustrated, ultimately increasing the possibility of attacks and fights. If your cat is spayed, this sexual interest would considerably be reduced. They will also get calmer most of the time as they wouldn’t get irritated with hormone fluctuation.

How to stop cat aggression towards humans

Cats can endanger our lives using their teeth and claws. So if you want to keep them as pets without putting your safety on the line, it’s a must that you know these key tips about how to calm an aggressive cat.

To solve the problem, you must first find the cause. Below is a list of common sources that can easily affect or influence your cat’s behavior.

Once you’ve found out that your cat’s aggression springs out from a health-related condition, don’t think twice. Take your pet to the vet as they know what treatment is best suited for your cat’s situation. Now, if the medical expert ruled out that your cat is in excellent health, then here’s what you need to do.

Once you’ve noticed that your cat’s aggression is about to take off, try to interrupt it, either via throwing a cat’s toy or by whistling. You can also show some treats or indicate that you have time to play with your pet.

Fortunately, there are many products available on the market today that can help you deal with sudden cat aggression. Some sprays and diffusers mimic feline pheromones almost naturally, which your pet can easily recognize. Such scents help make your cat feel secured and safe, removing the instances of anxiety attacks.

According to experts, aggression is one way of cats to release their energy. To prevent them from attacking humans or other cats, you must provide them with a stimulating environment where they can release their anxiousness and extra strength, such as cat condos, climbing perches, and scratching posts.

If you think you are doing everything you can and yet your cat is still aggressive most of the time, then perhaps it’s time to seek help from professional animal behaviorists. They have spent years learning about behavior modification, and they can surely give you valuable tips and assistance when it comes to calming your pet. They can also help you set up an environment and establish habits that can ultimately change your cat’s undesirable attitude.

Our furry friends can be the most wonderful companions on this planet. However, they can also be dangerous if not treated well. To establish an excellent owner-pet relationship, keeping the above tips in mind is definitely a must. WHAT IS YOUR CAT TRYING TO TELL YOU? WHAT GREATER GIFT THAN THE LOVE OF A CAT What Does Catnip Do to a Cat?

This article is written for all the cat owners out... Cat Tail Meanings: What Your Cat is Telling You

Everyone knows that cats are very unpredictable. One minute they’re... Coronavirus and Cats: A Helpful Guide for Cat Owners

Can cats contract the global pandemic coronavirus from humans, or... How to Take Care of a Cat

Bringing a new cat into the family is exciting and... Why does a cat purr?

Cats are among the most favorite pets that we love,... The Truth About a Cat Owner's Personality

Being a cat owner comes with a lot of assumptions... The Benefits of Having a Cat at Home

Cats, our adorable fuzzy friends who love to curl up... All The Good Things About Cats

Soft, purring, friendly, playful… life with a cat is an...
View all
Back to Cat Info